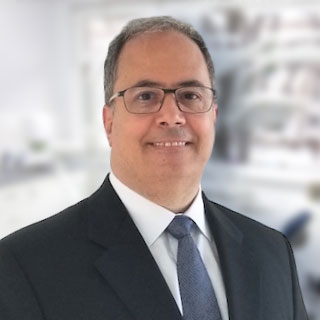 Dr. Sherry received his undergraduate bachelor’s degree in Biology at Vassar College in New York. He later went on to attend Emory University College of Dentistry in 1984 and graduated first in his class. Dr. Sherry continued to advance his skills by graduating from the University of Washington with a specialty in Periodontics in 1986 and his Master of Science in Dentistry (MSD) in Periodontal Microbiology in 1987.

Dr. Sherry has served as an Adjunct Clinical Faculty member teaching Periodontics at both the Medical College of Georgia (now Georgia Regents University) and Emory University College of Dentistry.

Dr. Sherry has been in private practice since 1987, specializing in Periodontics and Dental Implants. He has practiced in Peachtree City, GA from 2002 to 2011 and in Douglasville, GA from 2002 to present.

Dr. Sherry takes great pride in providing expert specialty dental care to his patients, specifically through his vast experience with dental implant surgery. He has placed thousands of dental implants and treated thousands of patients over his past 30 years in practice.

What our Patients Have to Say

The last time I saw you I still had packing and stitches and it was difficult to get a clear view of the work done. As my gums have returned to (better than) normal, I have realized the wonderful improvements that you have made. It is obvious you possess great skill. Thank you for your kindness, talent, and compassion. I truly appreciate everything that you have done for me. Thank you, also, for the level of comfort you provided. I will highly recommend you to anyone I know who needs your care.

Coming to a dentist’s office is probably not a favorite activity of most people, but Dr. Sherry’s “office atmosphere” is very special. When you enter the office, you can feel a genuine feeling that we care! The staff knows you are not looking forward to this and they go out of their way to make your visit a pleasant experience. Dr. Sherry is a perfectionist. He is the BEST in his field. He is always professional and his ability to relate to all patients is very evident….Dr. Sherry and his staff are the number 1 DENTAL OFFICE IN AMERICA!

Dr. Sherry, thank you for assuring me that everything is going to be fine and there’s no hopeless situation that you can’t fix. You made me smile when I really didn’t want to smile. Thanks for your comfort.

Dr. Sherry takes pride and expertise in what he does. He and his staff has in a small amount of time transformed my mouth and teeth into something that I can be proud of. I’m proud of the work he and his staff have done. It has really changed my life by giving me more confidence in my smile.

My experience at Dr. Sherry’s office has been so wonderful. Everyone is so friendly and really try to get to know you and remember you for lasting relationships. I had two implants put in the front. I was really concerned because it’s the first thing people see when I smile. The process of putting the implants in was so completely painless. I didn’t even need all the pain meds Dr. Sherry wanted to give me. One time I felt a little pressure in my gums and I raised my hand and Dr. Sherry fixed that so fast. It is so important to him that you feel no pain. He is a wonderful, wonderful doctor. I am so glad I came here. And now I have a beautiful smile! Thank you, I could never say that enough!

You are the most wonderful doctor, Dr. Sherry, I have ever had. You take the fear out of pain. I am so thankful to have you as my doctor. Your staff is also wonderful. You guys keep up the great work.